A story about a young woman, who has a secret.

Once upon a time, there was a young woman who fell in love…

They met in tango class. The girl was an university student, and the man was a doctor. They had long conversations. They imagined their future together. They wanted to have kids; one boy and one girl.

But the woman had a very big secret. She decided it was time to tell him: She was living with epilepsy.

“Why should it be a problem?”, he asked. “Do you have seizures?”
“I have been seizure free for more then 10 years now, with medication”, she told him.

And that was it. He had no more questions about epilepsy. Happily, it wasn’t a problem for the man, so they loved each other just as before.

Everything went well, until the girl discovered she was pregnant. At first her boyfriend was happy…

But then everything changed.

“When he told his mother about my risk pregnancy and my epilepsy, she became angry. She called me on mobile, and insulted me so badly. She told me, that I was deceiving her, and I will never get married to her son. I cried for a week. His mother thought that my baby would be disabled. And she wanted a paternity test!”

Together, the young woman and her boyfriend attended an epileptologist, to discuss the pregancy. Her boyfrind asked only negative questions – what was the probability of the child being born with disability? Would the child have autism? He became very cold with the woman. He no longer wanted to believe that he was the father of a baby. He told her that as she didn’t get along with his moth, he could see no future for them together.

From now on, she was alone with her epilepsy and with a baby in her belly.

The young woman’s doctor was concerned about her raising the baby alone. Mothers with epilepsy have to be more careful than healthy mothers. They can’t bathe the baby alone, because if they have a seizure (it doesn’t have to be a big one), the baby could drown easily. They should change diappers on the ground, so the toddler won’t fall down. And they shouldnt tie the baby to themselves – just think about that, if they were to have a seizure and fall down to the ground with a baby, shaking…

The young woman told the doctor, that she would get help from her parents, at least while the baby is very young. For her, sleepless night are a seizure trigger, and when the baby is born, she won’t have time to sleep properly. She knows it won’t be easy for her, but she won’t give up on the baby.

“I just realised how weak I am, because of my illness. I thought that I knew my epilepsy, but I was wrong.”

And then it happened. She was 9 weeks pregnant, when she had a grand mal seizure on the street. It just hit her. When a woman is pregnant, her epilepsy can change. The reason can be hormonal changes, or the baby ’eats up’ the medicine, so there isn’t any protection against the seizures.
After this, she had to take more medicines, and if these don’t work anymore, she would have to take a different one. There were no other options. It is really important to not to have seizures, while pregnant.

In the past, some antiepileptic drug (for example Valproate) were very harmful for the fetus. Doctors realised this 15-20 years later. There are doctors who still precribe this harmful medication for pregnant women. It is better to be well informed!

If pregnant women with epilepsy don’t get any meds, they will have seizures, which is also harmful for the fetus. Don’t take meds – you will harm the baby. Take too much meds, and you also harm the baby! But there are no other options for women in this situation. That is why they have high-risk pregnancy.

The young woman knows that epilepsy may arise in different situations of her life. But she will never give up, she always fights against prejudice. She hopes that one day, people will understand epilepsy.

“I can not be angry with my ex-boyfriend. He is not evil, just ignorant. And it is not the same. There could be other women out there, maybe men as well, who face a similar problem. Did they find a solution for themselves, or are they still searching for it?” 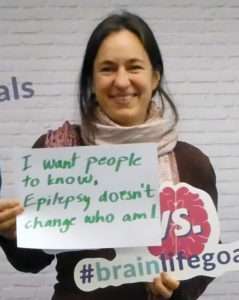 This blog post has been written in support of EFNA’s #BrainLifeGoals awareness campaign, encouraging people to share their #BrainLifeGoals in order to increase awareness of the issues faced by those living with a brain disorder.

“I want people to know, epilepsy doesn’t change who I am”

People living with epilepsy are absolutely normal. Maybe they have a little lack of self esteem, because they were bullied a lot at school. Please treat them normally!

Today, more than 50 million people are living with epilepsy. Yet this illness is very stigmatised.
People are misinformed, or don’t know anything about it. Some of them think there is only one type of seizure, the tonic-clonic or grand mal. Some think that all people with epilepsy are crazy, disabled, and that their children would be sick. That it is better not to have any contact with them.

What could improve their life? Understanding, awareness, medication, treatment, flexible working conditions (because we are valuable employees).

Hanna Novoszath is a young epilepsy advocate from Hungary. The article above is an extract from her blog, which can be read in full at https://epilepsyawareness.blog.hu/.

You can find out more about the #BrainLifeGoals campaign here.