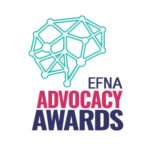 The EFNA Advocacy Awards recognise the contribution of an individual or group to the development and promotion of advocacy for people with neurological disorders in Europe. This year, the awards focus on the topic of ‘Advocating for Gender Equity in Neurology‘.

Gender equity means fairness of treatment for women and men, according to their respective needs. This may include equal treatment or treatment that is different, but which is considered equivalent in terms of rights, benefits, obligations, and opportunities.

On the evening of May 9th, EFNA’s members, partners and colleagues gathered in Brussels to celebrate our winners. And those winners are:

The Neurological Alliance (England)
Outstanding achievement by an organisation

The first award of the evening was presented by Myriam Bea, President at ADHD-Europe. Myriam nominated Chantel Fouche, Treasurer at ADHD-Europe and General Secretary of ADHD, ASC Belgium for her work in advocating for women with ADHD. Chantel is herself a person living with ADHD, having gone undiagnosed until recent years. She is also mother/carer of an adult son who lives with ADHD, as well as having a young toddler. Myriam recalled how Chantel has been volunteering countless hours each week to empower women with ADHD and raise awareness at regional, European and international levels.

“Her dedication, commitment, and engagement not only with high-level stakeholders and but with non-ADHD patient communities in the hope to further collaborate on overlapping disease areas/conditions”

Chantel is Project Lead of the Women and ADHD Project at ADHD Europe. The project started in 2020 by ADHD, ASC & LD Belgium and ADHS Deutschland by creating a website- www.adhd-women.eu (currently available in ENglish and German, with more languages planned). This website provides reliable information available for all women who have, or suspect they have ADHD.
Chantel administrates global women’s peer-to-peer support group meetings, which take place fortnightly. She shares monthly newsletters, bringing information to over 1,300 women about upcoming support groups, free events to attend, research news and opportunities, and she is currently preparing a webinar to focus on Gender Equality issues.

The second award of the evening was presented by Katharina Glanz, European Alliance for Restless Legs Syndrome (EARLS), to Prof. med Mauro Manconi, Neurologist and Head of the Sleep Medicine Unit, Neurocenter of Southern Switzerland, Regional Hospital of Lugano.

Katharina explained that EARLS had nominated Prof. Manconi in recognition of his continuous and outstanding work on the topic of Restless Legs Syndrome (RLS) and pregnancy. RLS during pregnancy may significantly impact on the health of affected women, leading to negative consequences in the short and long term. RLS affects about 10-34% of pregnant women and is thus two to three times more common than in the general population. The course of pregnancy can also be affected by RLS, with disturbances in falling asleep and staying asleep increasing the risk of reduced quality of life. It is also associated with an increased rate of caesarean sections. Pregnant women with RLS are at higher risk of pre-eclampsia, a serious complication of pregnancy (https://pubmed.ncbi.nlm.nih.gov/24994566/).
Mauro Manconi has shown in his research, the transient form of RLS in pregnancy is a significant risk factor for the development of a future chronic form of idiopathic RLS and for a new transient symptomatology in a future pregnancy (https://pubmed.ncbi.nlm.nih.gov/21135386/; https://pubmed.ncbi.nlm.nih.gov/15165540/). In addition, he has been able to show that women who had RLS onset before pregnancy and who had moderate or severe symptoms had an increased risk of prenatal and postnatal depression (https://pubmed.ncbi.nlm.nih.gov/24812538/). Depression, in turn, is associated with a significantly increased suicide risk; up to 20% of all deaths after birth in the western world are suicides.
Katharina stated that

“With his numerous relevant scientific papers, he has made a major contribution to the hitherto little-noticed problem area, has drawn attention to this highly underecognised topic and raised awareness on the problems of pregnant women suffering from RLS.”

Manconi’s achievements also extend to the development of appropriate guidelines for RLS, pregnancy and lactation, ensuring that concrete measures can now be taken to provide rapid help and appropriate treatment to affected women, their newborns and families. Prior to this there was very little information for physicians on the management of RLS during pregnancy. These guidelines are intended to improve clinical practice and promote further research.
Prof. Manconi dedicated his award to those living with RLS and to his wife, Barbara.

The final award of the evening was presented by EFNA President, Joke Jaarsma. The award was received by Georgina Carr, Executive Director of the Neurological Alliance (England), on behalf of the organisation. The Neurological Alliance have undertaken a major piece of work examining reported differences in access and experience of care between men and women, looking closely at the experiences shared with them by more than 10,000 people with neurological conditions as part of their annual patient experience survey. Through this work it was found that women were more likely than men to report delays to care, to report seeing their GP more than 5 times prior to referral to specialist care, and reported feeling less in control of their care.
The organisation used this evidence in June 2021 to submit a robust response to the UK Government’s consultation on it’s forthcoming Women’s Health strategy. As a result, the Government’s strategy contains important commitments for women living with long term conditions.
They have also worked with a collaborative group of neurologists to develop a focused literature review on prevalence, incidence, experience and access to care for the 10 most prevalent neurological disorders, with ‘protected characteristics’, including gender.

“As part of our commitment to Equity, Diversity and Inclusion, we have sought to ensure public policy is shaped around the needs and experiences of all people affected by neurological conditions, and recognise that experiences and access to care differs across genders.”

Congratulations to all our worthy winners and thank you to all who joined us to celebrate the evening.