EFNA launched the #BrainLifeGoals campaign in 2019 with the aim of raising awareness of the needs and goals of people with brain diseases. People are posting stories about their personal achievements and wishes on social media with hashtag #LifeGoals. People with brain diseases have their own goals, some of which are very fundamental – to speak clearly again, to walk, to look after themselves independently, etc. This is what the #BrainLifeGoals campaign is all about. Things that one person can do automatically and effortlessly are actually somebody else’s life goals.

“Stroke happens regardless of your age.”

The Stroke Association of Serbia is taking part in this campaign by posting stories of younger people who have suffered a stroke and overcome it. Nenad Nikolic, of the association explains: “Stroke happens regardless of your age. It can happen anytime, anywhere. It doesn’t matter if you are sleeping or playing with your children or you are at work.” 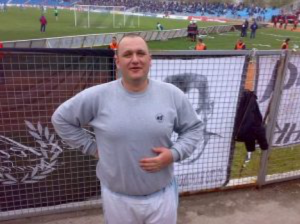 Dejan Stankovic (45), father of five children, used to be a warden at the Penitentiary–Correctional Institution. The risk factors in his case were smoking and obesity. During the night shift in early November 2016 he felt sudden vertigo. “Like the whole office was spinning around,” he said. His colleague noticed it and wanted to call for an ambulance, but believing it was a short weakness, Dejan refused. However, after a few hours it happened again, this time more severely and they decided to call for an ambulance.

Dejan was diagnosed with a stroke and, due to his overall condition, he was sent to the Department of Urgent Neurology. After his treatment in Belgrade was over, he was sent back to general hospital in Cuprija. He spent 12 days in both hospitals. Luckily, the stroke didn’t leave serious consequences. He feels numbness and tingling in his left arm and his hand grip is weaker. He has headaches more often than before and he has vision problems, now needing to wear glasses for farsightedness. One year after the stroke he received disability pension.

His main goal was to be able to walk more easily so that he could go for a walk with his children.

The recovery process had been going well, but at the end of 2017 he had another stroke. Due to serious lung issues he was hospitalized in Belgrade at the end of 2018. Dejan never lost hope nor the will to recover and his greatest motivation was his five children. His main goal was to be able to walk more easily so that he could go for a walk with his children. He started 2019 with the determination to reduce his weight and he has lost 80 kg since then. He no longer consumes sweets, pastries, mayonnaise or processed juice. He eats everything else but smaller quantities than he used to!

His message to everybody is to look after themselves before problems occur, and to pay attention in particular to body weight.

We are grateful to Dejan for sharing his story with us. If you would like to share your story, please get in touch with us!