On September 27th, EFNA Executive Director, Donna Walsh, traveled to Greece to speak at the annual Caring for Carers conference.

Taking place at the office of the European Parliament, Athens, the conference was organized by the Greek Carers Network – EPIONI. 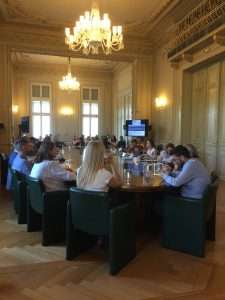 Donna spoke about the importance of caregivers for those living with neurological disorders and EFNA’s relevant advocacy work via its MEP Interest Group on Brain, Mind and Pain. See: www.brainmindpain.eu

She mentioned how EFNA was working on topics such as fighting stigma, isolation and discrimination – which were also of relevance to caregivers and encouraged the group to share their challenges, expertise and examples of best practice.

She explained, too, how the caregiving community could get involved in EFNA’s Training Initiatives for Neurology Advocates and its #BrainLifeGoals awareness campaign.

Many national experts, as well as representatives from other pan-European umbrella groups such as  Mental Health Europe, Eurocarers and the European Psychiatric Association, gave presentations on the day.

The conference was held under the auspices of the Ministry of Health in Greece, the World Federation for Mental Health, edwikionline11 the Hellenic Psychiatric Association and the European Brain Council.

EPIONI conducts informative events with the participation of stakeholders such as healthcare professionals, psychologists, social workers and lawyers, who provide advice on a wide range of medical, legal, educational and employment issues of interest to caregivers of people with a chronic disease or disability.