Dr Hans Kluge elected as WHO Regional Director for Europe 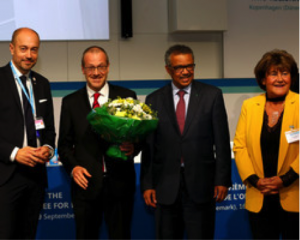 Dr Hans Kluge, a Belgian national, was nominated as the new WHO Regional Director for Europe on 17 September 2019. In his new position, scheduled to start on 1 February 2020, he will lead the WHO European headquarters and, together with the health ministers of the Member States, will develop the necessary health related strategies and programmes for the European Region.

The European Region comprises 53 countries, which include the countries of the European Union but also the central and eastern European countries such as Turkey and Russia.

The WHO European headquarters in Copenhagen supports health ministers in the development and implementation of their health policies, and provides guidance on how to adapt health systems to the changing needs of the population, such as the increasing number of chronic patients and mental health. The WHO also deals with major health threats in Europe, such as increasing antimicrobial resistance and decreasing vaccination coverage, and supports health ministers in reducing non-communicable diseases such as cancer or diabetes, and promotes a healthy lifestyle.

Dr Kluge, is currently Director of the Division of Health Systems and Public Health at WHO/Europe. He brings a lot of experience to the WHO headquarters in Copenhagen with his 24 year involvement in public health. He started his career as a family doctor in Belgium and served for Médecins Sans Frontières in Liberia and Somalia. For the past ten years, he has been working as Director of the WHO Health Systems Department in the European region, where he was engaged in large-scale system transformations, including the introduction of community-based primary health care in Greece during the financial crisis, the implementation of the Tallinn Charter, and the advancement of commitments adopted at the Global Conference on Primary Health Care in Astana, Kazakhstan, in 2018.