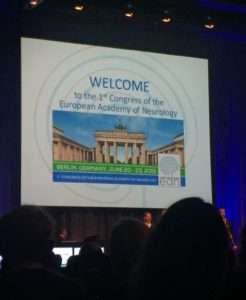 It’s been a busy June for EFNA; culminating in our participation at the first Congress of the European Academy of Neurology [EAN].

The EAN was born just one year ago following the coming together of the EFNS and ENS, and its first congress was held in Berlin – a city symbolising unification!

With over 6,000 participants from across Europe and the world, EFNA used the opportunity to raise awareness of our work. Along with our Members, we held a Patient Corner in the Exhibition Centre where we distributed information and networked with interested neurologists.

While EFNA was represented on the Liaison and Training & Education Committees of the EAN, many of our members were invited to sit on the relevant sub-speciality panels where they provided the patient perspective.

To coincide with the Congress, EFNA also held our Annual General Assembly where we saw the election of a new President, Ann Little (representing the International Bureau of Epilepsy). Audrey Craven stepped down from the role after three and a half successful years in working to implement EFNA’s new strategic direction.

We also welcomed a new Board Member, Nancy van Hoylandt of the European ME Alliance – EFNA’s newest member!

An awareness day on Headache and Sleep Disorders – organised jointly by EFNA and the EAN – was also held for German Patients.

And, our Corporate Partners Meeting with interactive sessions for the EFNA membership and our sponsors capped five successful days of activity!

All of the above was made possible due to the respect the leadership of the EAN shows to the patient voice but also because of the support of the EAN’s Liaison Officer Eveline Sipido – who has championed EFNA and its work for many years.

To recognise her outstanding contribution and dedication to our cause we presented Eveline with the first EFNA Lifetime Achievement Award during the Congress. Congratulations Eveline!