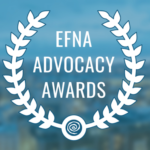 These awards will recognise the contribution of an individual or group to the development and promotion of advocacy for people with neurological disorders in Europe.

Nominations for the EFNA Advocacy Awards can be made in each of the below categories:

A high-level judging panel will assess all nomination received and choose a winner. They are:

Nominations will only be accepted from EFNA Member Organisations and Associate Partners. If you are eligible to submit an entry and haven’t yet received the nomination forms, then please get in touch.

The awards were launched at the annual congress of the European Academy of Neurology on Sunday, May 29 th .

Nominations will be accepted from Friday, June 3rd until the closing date on: Friday, July 16th.

Winners will be presented with their award at a gala dinner in Dublin on Thursday, October 13 th .