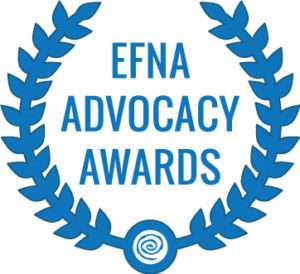 In 2018, EFNA will hold the latest edition of its biennial Neurology Advocacy Awards.
These awards recognise the contribution of an individual or group to the development and promotion of advocacy for people with neurological disorders in Europe.

This year, to coincide with EFNA’s focus on young people, the awards will be given to advocates under the age of 40.
And the awards will be presented at a gala dinner during our workshop for Young Advocates in Brussels on November 20th.

The categories will be:

The extended guidelines can be found here, along with a nomination form for each category.

Nominations should be received before Friday, September 7th.

So, if you work with a young person who you feel deserves some increased recognition, why not nominate them today! We look forward to receiving your nominations in the coming weeks.