“I have met many really hard working and dedicated people here in Tuebingen and learned more about how they already work within the network and what their ambitions and wishes for future is”, says an enthusiastic Astri Arnesen, EFNA Secretary General and ERN-RND patient representative. 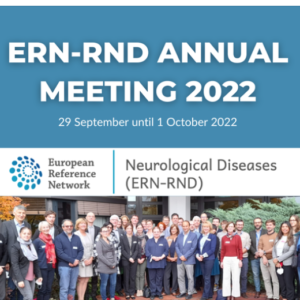 The network partners met in Tuebingen in Germany at the end of September for the annual meeting. Since the previous face-to-face meeting the network has gained many new partnering clinics. From the initial 31, there are now 68 clinics from 24 countries.

In my opinion this network will be an important part of providing expertise and best practise treatment and support to RND patients all over Europe.

“It was very good to finally be able to meet people face-to-face again”, says Astri. “I have been involved in the network since the start, and it is great to see that it’s growing and evolving. In my opinion this network will be an important part of providing expertise and best practise treatment and support to RND patients all over Europe.”

ERN-RND is coordinated from Tuebingen by dr Holm Grassner and his team. “I think I speak on behalf of all of us when I say that the network has a big potential to drive research, develop practices and really help patients affected by a rare neurological disease to live better lives”, says Astri.  “Together with my fellow patient representatives we work hard to make the network known in our disease communities and to have the ERN-RND partners committed to share their expertise both within the network but also in their respective countries.”

“I learned a lot during the days in Tuebingen and I look forward to work more with the network partners for the best of the patients and their families.”