“Out of Office” European Parliament event 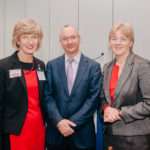 The Economist Intelligence Unit [EIU] presented ‘Out of office! – An overview of workplace absenteeism in Europe’* at an event co-hosted by MEPs Marian Harkin and Linda McAvan, in conjunction with the European Federation of Neurological Associations (EFNA), Pain Alliance Europe (PAE) and GAMIAN Europe.

“Out of Office” Research Report

The EIU report highlighted the variation in benefits to cover sick leave across Europe and the need for better information-sharing between European countries to help identify best practice. According to the EIU, then, a key role for the European Union is to build systems that allow for comparisons between national systems, which would help national policymakers identify and pursue best practice.

At the event, organised by the European Federation of Neurological Associations [EFNA], the patient perspective was to the fore in illustrating the impact and burden of working with a disability. The brain, mind and pain axis was represented by EFNA, GAMIAN and Pain Alliance Europe (PAE). The patients’ perspectives presented by Joop van Griensven (PAE) and Patrick Colemont (GAMIAN) underlined how the social stigma adds on to their invisible diseases and takes over their lives. The lack of understanding and support from their peers, their superiors or the authorities is isolating them from society and the workplace, with significant economic costs for society as a whole.

EFNA believes an ageing population is one of the greatest challenges for European employers. Neurodegenerative diseases, for example, currently affect over 9 million Europeans, while chronic pain is something 100 million Europeans have to live with. According to Audrey Craven, EFNA President, “Many people affected by neurodegenerative diseases want to remain at work. However, inadequate protections and supports exist in many European countries – and those affected can face stigma and discrimination. The statistics suggest that these issues will only worsen if not tackled now.”

Linda McAvan supports this view by adding that “people with certain long term conditions such as neurological disorders need support to stay in the labour market when suitable work is available. The EU can facilitate the exchange of best practice both for patients’ organisations and healthcare professionals.”

Marian Harkin welcomes the patients’ active role in addressing these issues and invites the EU bodies to act and react on them.

‘‘The European Commission attaches a great importance to improving health and safety at work in the EU, taking particular account of the challenges imposed by the ageing of the working population and the need to tackle new and emerging risks. The European Agency for Health and Safety at Work is developing important awareness-raising actions, such as a Pan-European Campaign 2014-2015 on ‘Managing stress and psychosocial risks at work’ that will be launched soon.  But one of the biggest challenges remains the engagement and collaboration of all the actors involved, not only at an European, but also at a national level’, explains Jesus Alvarez, Deputy Head of Unit at the European Commission’s  Health, Safety and Hygiene at Work Unit.”

The echoing message sent by MEP Linda McAvan, MEP Marian Harkin and Jesus Alvarez, was that collaboration between the EU institutions, patient organisations and the member states is essential for advancing the existing projects in the field of health and work.

* ‘Out of Office!’ is an Economist Intelligence Unit study supported by Pfizer