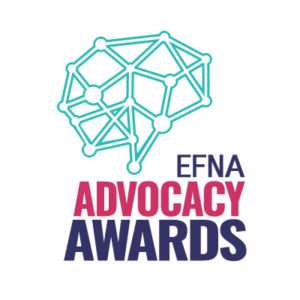 The European Federation of Neurological Associations (EFNA) Advocacy Awards recognise the contribution of an individual or group to the development and promotion of advocacy for people with neurological disorders in Europe. Held biannually, in 2021 the awards have focused on the topic of ‘Action against stigma’.

According to the World Health Organisation, stigma is a major cause of discrimination and exclusion: it affects people’s self-esteem, disrupts their family relationships and limits their ability to socialise and obtain housing and jobs. Lack of understanding is seen as the biggest cause of this for people living with neurological disorders, followed by myths/misconceptions and their invisible nature.

As part of its Brain Awareness Week celebrations, EFNA are delighted to announce the winners of this year’s awards, each of whom will receive a prize of €2,000 to assist with the continuation and development of their projects. There were 20 nominations to each category from around Europe, all of an extremely high standard.
And the winners are…

‘Action against stigma’ – Outstanding achievement by an individual

Natalie Davidson is British teacher who lives with Tourette Syndrome.

Natalie first engaged with advocacy work nine years ago, participating in a British regional TV programme called ‘Inside Out’ that showed the public how, although Tourette Syndrome brings real challenges, Natalie is leading a happy and successful life. The UK television channel Channel Five later developed a full documentary about Natalie and the work that she does. The programme ‘Teacher With Tourette’s: Cursing In the Classroom’ provided a fantastic opportunity to help spread awareness, reduce discrimination and raise aspirations for those with Tourette Syndrome.

Natalie has worked with national and regional support associations to deliver live talks, workshops, presentations and webinars. She has connected with teachers, lecturers, parents and patients. Natalie’s work has focussed on raising aspirations and giving hope to parents and individuals who have Tourette Syndrome and showing them that the pathway is going to be hard but it is a pathway that you can reach the end of. Natalie warmly encourages positivity and as well as acceptance and belief that people can achieve their goals as well as facing the challenges of having Tourette Syndrome. One of Natalie’s goals has been to educate teachers and lecturers on different strategies to enable those within their classrooms and schools to reach their highest potential.

Natalie was nominated by Seonaid Anderson of neuro-diverse.org. The nomination was also supported by Sarah Sharp, CEO of Tictock Therapy. Sarah explained:

“Natalie Davidson is an incredible role model for our Neurodiverse community. Natalie has bared all in a documentary following her life, living with Tourette’s & OCD, yet still fulfilling her dream to become a teacher. I direct people daily to follow her journey via social media, as she shows resilience and how she copes with the stigma of living with these conditions. I love how she portrays the journey as ‘real’ and doesn’t just show the highs.”

You can follow Natalie on social media to learn more about her story and her advocacy work:

‘Action against stigma’ – Outstanding achievement by an organisation

For Migraine Awareness Day of Action on 12th of September 2020, the European Migraine Headache Alliance (EMHA), launched the ‘The Truth Behind Migraine’ – a video piece that portrayed real testimonies of how migraine affects the day to day of those who suffer from it.
The piece reveals a serious insight on the disease: that general practitioners have very little knowledge about the disease, resulting in delays to diagnosis of more than 4 years in many cases. ‘The Truth Behind Migraine’ sought to raise general awareness but also to put pressure on one of the main actors in the problem: the medical community.

This work was linked to a sub-action called ‘The Missing Lesson’ in which EMHA reported that migraine, as the second most disabling disease in the world, is only studied for 4 hours at university by prospective doctors. Together with the neurologist Dr. Dimos Mitsikostas, EMHA developed a syllabus for this ‘missing lesson’ and shared it via Instagram, providing the basic knowledge to understand and not underestimate migraine. The campaign was presented at the European Parliament with the aim of raising awareness among policy-makers of the necessity to improve the training of the medical community on migraine.

“The Truth Behind Migraine’ does not settle for the ‘typical’ arguments of migraine, but goes further and investigates much more real ‘insights’ from those affected by the disease. With this, we are giving a real and updated image of migraine sufferers.”

You can learn more about the work of the European Migraine and Headache Alliance, as well as about migraine itself, through their website and social media channels:

Although there were only two prize categories in this year’s Advocacy Awards, the judges asked if some additional acknowledgements could be made on account of the strength of nominations submitted. This was particularly true of the individual advocacy category. For this reason, both Maire Tansey and Dr. Gionnis Goules have been recognised as highly commended, and will also receive trophies.

Maire Tansey (Ireland) has worked on Epilepsy Ireland’s ‘Training For Success’ course for over 20 years.

Training for Success is a dedicated course for people with epilepsy in Ireland and is the only course of its kind in Europe. As epilepsy can be difficult to manage in some cases, this can lead to a person’s educational and social development being stifled. The course aims to empower person’s with epilepsy to manage their condition while providing participants on the course with the vital skills to either enter the workforce or pursue further education.
Patrick McGeoghegan of Epilepsy Ireland, explained:

“Maire is key to the student’s experience on the course and in helping them manage their condition;  showing them that they can go on to further education or enter the workforce; and that their condition does not have to define them. It clear that she has had significant influence in helping people with epilepsy overcome their sometimes self-determined stigma about epilepsy.”

Further information on Training For Success is available at the link below:
https://www.epilepsy.ie/content/training-success

“I was looking for a more appealing way to teach physical sciences that would engage students with learning difficulties. As a result, I experimented in combining natural sciences with stand-up comedy”

Giannis has developed what he calls an ‘approach-performance method’ which is based on empathy, aiming to empower neurodivergent students and spread awareness between parents and educators. He has now delivered his ‘’Stand Up Chemistry’’ performance in 250 schools, reaching 17,500 pupils, 1,200 educators and 500 parents since 2015. The content and the level of interaction is adapted to children with neurodevelopmental disorders (ADHD, Dyslexia, MS, Epilepsy, Autism).

“My different way of thinking gave birth to the urge to overcome stigma and dedicate part of my life to empowering people.”

Thank you to our judges