The European CMT Federation (or ECMTF) has launched its 4th campaign to raise awareness about the Charcot-Marie-Tooth group of diseases: the most common of rare diseases. It will run in October 2020 in 7 European countries, and it aims to make the general public and health professionals more aware of the pathologies and symptoms. This campaign aims to improve screening and limit diagnosis errors to get the best possible care as early as possible…

A rare disease … yet common

Charcot-Marie-Tooth disease (CMT), named after the three doctors who first described it, is a rare and little-known neuropathy.
The number of sufferers in Europe is estimated to be around 300,000 people, which makes CMT the most common of rare diseases!
CMT is a genetic disorder that affects the peripheral nerves linking the spinal cord to the muscles and the sensory organs, transmitting messages from the brain to the limbs. These signals involve motor abilities, affecting movement, and sensory faculties, affecting the sense of touch or feeling pain. The combination of these messages also helps in maintaining balance.

A disease which “is unknown and ignored” 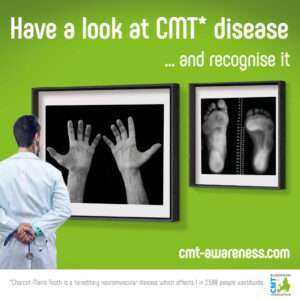 The disease develops slowly and has many repercussions: progressive deformity of the feet and the hands (foot drop, claw toes, wasting muscles in the calves, forearms, and hands), problems with balance, sensitivity issues, tiredness, pains, cramps, etc. and the quality of life for Charcot-Marie-Tooth sufferers deteriorates.
CMT is often spoken of as an “invisible disability” because the difficulties are usually not readily visible or underestimated. The number and the severity of the symptoms are also extremely varied from one patient to another. Understanding CMT is also made more difficult for family and friends, as well as for health professionals involved in the diagnosis.

A communication campaign to get the Charcot-Marie-Tooth disease known and recognised.

The 4th campaign by the European CMT Federation begins on the 1st of October in 7 European countries: United Kingdom, France, Belgium, the Netherlands, Italy, Spain, and Germany. There are two visuals, one for the general public and one aimed at health professionals who will back up the awareness campaign around Charcot Marie Tooth diseases. There will be a poster campaign in the London Tube and the Paris Metro, and displays on Milan’s bus shelters. In each country, there will be a digital campaign aimed at doctors and podiatrists on LinkedIn and in the specialised press, which will last for about three months.