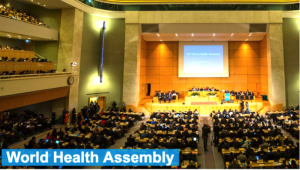 The 72nd annual World Health Assembly, which is the decision-making body of the World Health Organisation, took place in Geneva between 20-28 May. This summary presents its main outcomes focusing on the following areas: non-communicable diseases, resolution on price transparency of medicines and universal health coverage.

During the 72nd Assembly the Member States adopted a new global strategy on health, environment and climate change and committed to invest in safe water, sanitation and hygiene services in health facilities. Countries adopted a landmark agreement to enhance the transparency of pricing for medicines, vaccines and other health products. They agreed on the new WHO programme budget and on a common approach to antimicrobial resistance.

Patient safety was recognized as a global health priority and the 11th Edition of the International Classification of Diseases was adopted, where for the first time, WHO is classifying gaming disorder as an addictive behaviour disorder. Among other ICD-11 decisions are the inclusion of traditional Chinese medicine and removal of gender incongruence out of mental disorders in the ICD, into sexual health conditions.

Countries agreed three resolutions on universal health coverage with a focus on primary healthcare, the role of community health workers and the High-Level Meeting on Universal Health Coverage in New York in September 2019.

The short summary below outlines the most important decisions taken by member states and their impact on non-communicable diseases.

The Assembly noted the report and adopted the decision, which calls for World Health Organisation to define recommended policy interventions on air pollution and mental health and extends the timeframe of the current global action plans on non-communicable diseases and mental health to 2030.

Member States approved the programme budget for the next biennium. The budget will increase resources for national level activities, monitoring and reporting, particularly with regard to achieving the “triple billion” targets.  Specific indicators will be included for non-communicable diseases. Relevant budget lines for non-communicable were increased, with specifically 5% more for these diseases. Compared to the previous budget a significant increase of 24% is also foreseen for strengthening of the health systems.

Member States agreed a new global strategy on health, environment and climate change. The strategy provides a vision and way forward on how the world and its health community need to respond to environmental health risks and challenges until 2030. They also agreed a plan of action on climate change and health in small island developing States.

Implementation of the 2030 Agenda for Sustainable Development

Assembly noted the report which provides an update on progress towards achieving the health-related Sustainable Development Goals. A section on non-communicable diseases notes trends in alcohol consumption, tobacco use and suicides. The section on universal health care notes problems with access to essential medicines for pain and palliative care, increasing HPV vaccine coverage, and poor alignment between global public health needs and research and development spending. A section on environmental risks is also highly relevant for non-communicable diseases.

40 Member States requested support to implement the global strategy, and called upon all stakeholders to increase investment to advance this critical priority in order to realise universal health coverage. Member States were encouraged to report their national data on human resources for health through an online platform.

WHO Reform: Engagement of Non-State Actors

Opinions on the value and means to engage civil society and other non-State Actors in World Health Organisation governing body meetings varied considerably. It was generally agreed current ways of operating are not satisfactory for Member States, nor for non-State Actors, and that ways forward must ensure that engagement is meaningful, relevant and efficient. The Secretariat will provide an updated proposal to the Executive Board in January. Dr Tedros noted the benefits of engaging with civil society, for example throughout the WHO Civil Society Working Group on NCDs.

The resolution to bring more transparency of prices of medicines was formally adopted by countries in the World Health Organization. This non-binding resolution urges countries to provide public information on net prices of health products and results of clinical trials, along with their costs – the latter on a voluntary basis. Supporters claim this would help countries negotiate lower prices.

The resolution also asks the World Health Organisation’s secretariat to monitor the effect of transparency on access to medicines — in particular its effect on differential pricing. The global pharma lobby warned that disclosing prices could make it harder for the industry to offer lower prices to poorer countries.

The resolution was initially tabled by Italy, and the final consensus text gathered 19 co-sponsor countries in all regions.

The resolution was preceded by a vivid debate in a drafting committee. While the resolution, like most decisions at the annual gathering, was adopted by consensus, three countries — Germany, the U.K. and Hungary — said they wouldn’t sign onto the measure, citing objections to the tone and timing of the discussion.

The 72nd Assembly was dominated by the theme of Universal Health Coverage, as a cornerstone of the World Health Organisation’s work programme 2019-2023. The vast majority of events during the week debated how to achieve this vision, ensuring that coverage becomes truly universal for all health conditions and population groups. The Assembly adopted resolutions presented to the Executive Board in January 2019 on Primary Health Care, Community Health Workers and Preparations for the High Level Meeting on Universal Health Coverage in September 2019. The zero draft of the political declaration to be adopted during the High Level Meeting was published during World Health Assembly, ahead of Member State negotiations in New York.