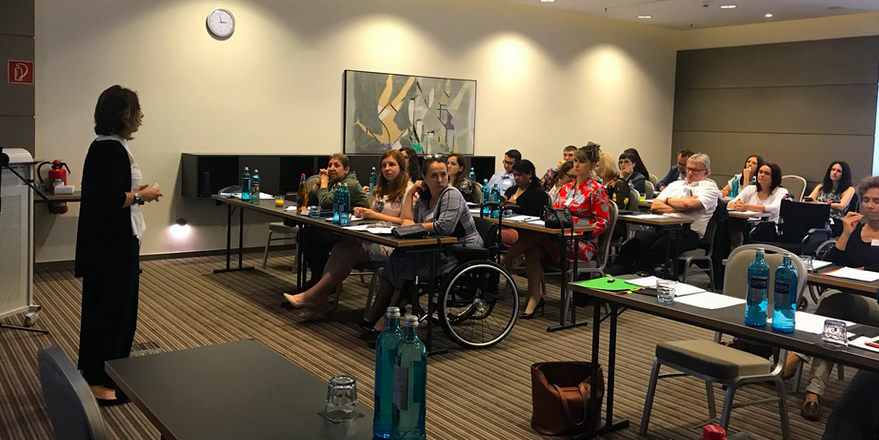 EFNA’s latest Training Initiative for Neurology Advocates, took place as a satellite session to the FENS Forum in Berlin on July 6th and 7th.

The FENS Forum is a basic neuroscience conference, organised by the Federation of European Neuroscience Societies.

Exploring the theme of ‘Science for Advocates’, the workshop drew over 30 patient advocates to learn how to better access, understand and communicate basic neuroscience.

Opening proceedings, Monica di Luca – President of the European Brain Council – spoke about the impact of brain disorders in Europe; focussing on cost and burden. However, she also presented the achievements of European brain research, but stressed how we need to continually advocate for increased resources to create better treatments and – perhaps eventually – cures. She said patient organisations could play a key role by calling on the European Institutions to ensure that brain research is prioritised in the upcoming EU Funding Framework (Horizon Europe), with a Brain Mission for Europe.
You can read the European Brain Council’s proposed Brain Mission here.

The next presenter was Gaia Novarino of the FENS Kavli Network of Excellence. She presented some concrete examples of recent advancements in the field of brain research, focussing on autism spectrum disorders. She called for genetic characterisation of each neurological disorder, as well as early genetic testing for patients. She also spoke about how translational medicine should become a central part of clinical assessment, and called for patients and their families to get involved in translational studies. She stressed the important of patient organisations and the research community to work together to communicate science – dispelling myths – to wider society.

Given the advancements in science presented by the first two speakers, the third presentation was a timely focus on neuroethics. This compelling lecture was presented by Marcello Ienca who gave a background to the topic, before moving on to discuss four case studies in the areas of data mining, neuroprosthetics, brain implants and experiments with human brain tissue. He called for responsible, patient-centred innovation – balancing research innovation with subject safety.

The final presentation of the day was on another controversial topic – animal research. This was given by Kirk Leech of the European Animal Research Association. He predominantly focussed on how we can improve transparency and communication on animals used for scientific research.

After a first day of presentations, Day 2 focussed more on interactive sessions – led by Punch Consulting. These were:

The group were tasked with using their newly acquired skills to design a political or public awareness campaign, based on a controversial issue in neuroscience. There was fun in the afternoon when each group pitched their campaigns and the judges chose their winner!

The feedback from all was overwhelmingly positive and discussions are already planned to explore how this ‘Science for Advocates’ approach can be further pursued in partnership with FENS in future.

Presentations from the day are available to download here.