European Migraine and Headache Alliance (EMHA) is an umbrella group which aims to coordinate the work of national patient organisations to raise awareness of headache-related issues throughout Europe, promoting early diagnosis and access to appropriate treatment.

The Alliance was launched in 2006 and now represents more than 33 patient groups across the continent.
EMHA is an active member of the European Federation of Neurological Alliances [EFNA], the International Association of Patient Organizations [IAPO], the European Patients Forum [EPF] and also works closely with different organisations such as the European Headache Federation [EHF], European Brain Council [EBC] among others.

The purpose of EMHA is to represent the views and needs of headache patients across Europe to the European Union and other relevant institutions with the aim of relieving the burden of headache.

About Migraine and Headache

Not only is headache painful, but headache disorders are also disabling. Worldwide, according to the World Health Organisation (WHO), migraine alone is one of the top ten leading causes of disability and affects 12-15% of the population.

Headache disorders impose both a social and financial burden on many sufferers. Repeated headache attacks, and often the constant fear of the next one, damage family life, social life and work life. In Europe, migraine alone costs the economy €27 billion annually in reduced productivity and work days lost according to the 2006 Cost of Brain Disorders in Europe paper.

Migraine is a neurological condition. It is a primary headache disorder, probably with a genetic basis. Activation of a mechanism deep in the brain causes release of pain-producing inflammatory substances around the nerves and blood vessels of the head. Why this happens periodically and what brings the process to an end in spontaneous resolution of attacks are uncertain.

Because it is an invisible disease, migraine is underestimated, under-recognised and under-diagnosed.
That’s why EMHA launched The Counter, a tool that shows that migraine is a serious neurological disease.
The Counter allows those living with this disease to make their migraine count! Access The Counter here. 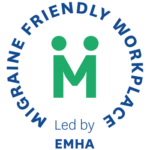 Workers who suffer migraine have to deal with their symptoms, their triggers, their pain. They also have to deal with the challenges of their jobs, pretending their migraine is invisible.
EMHA has now launched the Migraine Friendly Stamp, a stamp that guarantees a more inclusive, migraine-friendly workplace.
For more information on the project or to get a Migraine Friendly Stamp for your company, visit www.emhalliance.org/for-companies/