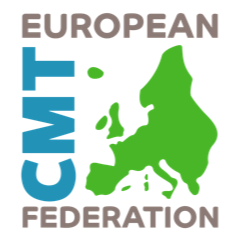 One of the Federation’s primary goals is to encourage research projects for an affordable and effective treatment for CMT. ECMTF promote communication and collaboration between CMT organisations/charities, provide help and advice for the creation of further CMT organizations where no such organisation exists currently.

Furthermore, every year in October, for five years now, ECMTF organise the CMT Awareness Month. This campaign runs mainly in the European countries, but, as CMT-Israel and CMT-China joined the Federation, visuals are translated and also published in these countries.

ECMTF wish to spread this campaign to as many countries as possible.

Charcot-Marie-Tooth disease is a genetic, rare, orphan neurological disorder affecting the peripheral nervous system. The number of sufferers in Europe is estimated to be around 300,000 people, making CMT the most common of rare diseases, often under-diagnosed or diagnosed with significant delay and subject to stigma.

More than 1,000 different mutations have been discovered in 80 disease-associated genes, which means CMT comes in various forms, more or less severe.

The condition can affect patients very differently, even in the same family, and affects all ethnic groups worldwide.

CMT may also be known by other names, including:

Throughout the year, posts from past years (and new posts) are published to set the stage for the new campaign. ECMTF are preparing webinars and interviews which will be published in October.

The Federation has a website dedicated to the Campaign: www.cmt-awareness.com/