In 2018 EFNA plans to focus on young neurology patients. Our goal is to create a programme that assists young people in becoming advocates for their own disease areas. This pan-European programme would engage young people from across the continent, with the potential to be recreated at National level through our member organisations.

EFNA represents 20 European and International associations across a wide variety of neurological disease areas such as multiple sclerosis, epilepsy, migraine and ADHD. Consensus among our members is that young people are currently under-represented in their associations. It is also felt that the issues facing young people affected by brain and brain-related disorders are not getting the public or political attention they should.

Those living with chronic illness face a number of additional burdens as young people. Often they are unable to complete their education, unable to take a place in the workforce, fear they will not find a romantic partner or have to watch their peers participate in activities they cannot access. Comorbidity between neurological diseases and mental health disorders such as depression and anxiety is common. These comorbidities increase disease burden and stigma – issues acknowledged across our membership. 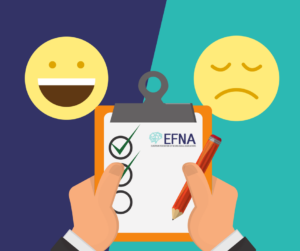 In 2018 EFNA conducted a survey to explore problems faced by this age group, as well as their feelings around levels of understanding of their disorder and their engagement in advocacy work or patient groups.

Between March 12th and May 15th 2018, 1368 responses to the survey were received from 39 countries. Almost 80% of the respondents were female, with the majority of the responses coming from the below disease areas:

The top concern cited by respondents was ‘access to medication/treatment’, followed closely by ‘isolation’ and ‘stigma’. This isolation and stigma could be attributed to the lack of public understanding of brain disorders.

You can read the complete survey report here: www.efna.net/efnayoungpeoplesurvey/

In November 2018 EFNA will host a workshop in Brussels specifically for young neurology patients entitled ‘Patient Advocacy in the Digital World’. Up to 40 Europeans aged 18-35, living with a wide variety of neurological disorders, will be invited to participate in this two-day event.

A series of workshops will explore how participants can raise awareness of the issues identified and advance their proposed solutions. Sessions will include:

Participants will have the opportunity to attend the Brain, Mind and Pain MEP Interest Group at the European Parliament, where young people’s issues will be the focus of the day. The EFNA Advocacy Awards will also take place during the event. This year’s awards will be for young people, with categories for Young Advocate, Young Policy-Maker and Young Health Professional.

Following the workshop, participants will be tasked with completing a digital advocacy project (such as a blog post or campaign proposal). Support will be provided by EFNA and national patient organisations.

Please note that spaces for this workshop have been filled.

With thanks to Genzyme and Novartis