Neurology has been awarded overdue attention in a report published by the World Health Organisation [WHO] in advance of the recent World Health Assembly. 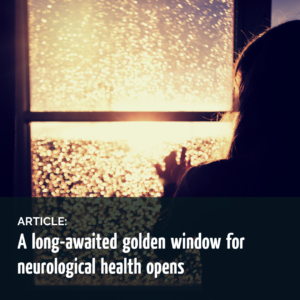 For many years, neurology has been overlooked by WHO in its work on non-communicable diseases, aside from disease specific efforts in areas such as epilepsy and dementia.

However, following recent advocacy actions, led by the European Federation of Neurological Associations [EFNA) and partners, WHO agreed to expand its work on epilepsy to look at its ‘neurological synergies’.

Published in advance of the World Health Assembly [WHA], the ‘Consolidated report by the Director-General’, included five pages outlining the prevalence and burden of neurological disorders based on the latest available data. It also outlined the gaps in access to care and services, as well as recommendations for an integrated response to these challenges.

Unfortunately, the WHA was condensed into two days and took place virtually with a focus on Covid-19. However, this agenda item will be covered later in the year and provides us with a long-awaited window of opportunity to push for neurology to be given the priority it deserves amongst actions on non-communicable diseases (NCDs).

The full text of the report can be accessed here.

Below is an overview of the EFNA led advocacy actions in 2020 which have pushed for this opportunity along with further details on the key points from the report.

ADVOCACY FOR NEUROLOGY – AN OVERVIEW OF EFNA-LED ACTIVITIES IN 2020

On February 18th, EFNA co-organized an event in the European Parliament to discuss the latest developments in the global brain health agenda and how they could be translated at EU level.
Read more on the meeting outcomes in our recent article: Brain Health as a Global Priority – time for the EU to act now.

Little did we know that soon after, all events across the globe would start to be cancelled – we were still oblivious to the impact of the Covid-19 tsunami which was on its way to Europe at that time.

Earlier in February the WHO Executive Board (EB) took place, with an optimistic and ambitious agenda addressing a wide range of global health topics. One of these was a report on Epilepsy, which EFNA had seen as an ideal opportunity to initiate a broader discussion on neurology.

Ahead of the meeting we sent, to all the 34 WHO EB members, a concept note calling for WHO to build on the work it has begun on a small number of neurological disorders, such as epilepsy, by developing a broader, long-term and strategic portfolio of work in the area of neurology and brain health. See the full concept note here.

We were delighted to witness that neurological health was, indeed, discussed by the Executive Board in the context of epilepsy. A formal Decision was subsequently adopted to widen the scope of the epilepsy report by adding a section entitled: “Epilepsy and its Neurological Synergies” to be tabled and discussed at the World Health Assembly (WHA) in May. The Decision also invited WHO countries to open a discussion about a possible resolution on epilepsy and other neurological disorders.

Unsurprisingly, due to the Covid-19 pandemic, the 73rd WHA—its first-ever to be held virtually— condensed its agenda to fit into two days (18-19 May) and the pandemic monopolized the discussions.

However, ahead of the Assembly, much ‘non-Covid’ specific preparatory work had been carried out by the WHO Secretariat which materialized in the “Consolidated report by the Director-General” made public several days ahead of the WHA. The report met the WHO EB request for exploring synergies in addressing the burden of epilepsy and other neurological disorders.

We believe at EFNA that the said report is a watershed moment in terms of bringing neurology out of the shadows, back to the mainstream of global non-communicable disease (NCD) priorities. It promises to create a long-awaited golden window for our field.

We are providing here a summary of some key points addressed therein.

The report starts with a recognition that “neurological disorders are an important cause of morbidity and contribute substantially to the global disease burden”, adding an estimation of one in three people worldwide that have a neurological disorder at some point in their lifetime.

It reminded us that “globally, neurological disorders are the leading cause of disability. The four largest contributors of neurological disability adjusted life-years in 2016 were stroke (42.2%), migraine (16.3%), dementia (10.4%) and meningitis (7.9%). Epilepsy ranks fifth.”

In terms of mortality, it notes that “over the past 30 years, the absolute number of deaths due to neurological disorders has increased by 39%. In 2016, they accounted for 9 million deaths per year globally, making them the second leading cause of death worldwide after cardiovascular diseases; of such deaths, most are attributable to stroke (67.4%), dementia (20.3%) and meningitis (3.7%).”

Very importantly, it acknowledges that much of the neurological burden is potentially preventable which opens a door for devising and implementing cost-effective interventions and ‘best buys’ for neurology.  The report makes it clear that brain disorders share many similar lifestyle risk factors with other well-known NCDs.

Further on it analyses the main factors contributing to the wide treatment gaps for neurological disorders. This, they say includes:

These conclusions fall very close to EFNA’s advocacy priorities which are:

In order to address these challenges, the WHO report expands on key aspects of the care continuum to be approached in an integrated manner:

It is noted that “since many neurological conditions are chronic, they require coordinated, multidisciplinary, integrated management and rehabilitation delivered through a stepped model of care including primary health care and specialist services, often also involving multiple other sectors such as social care and education for neurodevelopmental disabilities, stroke and dementia”.

Of a particular importance is a point stating that “Existing high-level commitments – such as the 2030 Agenda for Sustainable Development, the political declaration of the high-level meeting of the General Assembly on the prevention and control of non-communicable diseases and commitments to universal health coverage – have not afforded neurological conditions the political priority on national agendas that they require and fall short on tangible global commitments specific to reducing the burden of neurological disorders. In 2017, only 24% of countries globally had stand-alone neurological health policies, with major deficits in low- and middle-income countries. However, strategic linkages to these high-level commitments could form a strong foundation for an integrated approach to all neurological disorders. For example, in order to achieve universal health coverage (UHC) as part of the Sustainable Development Goals (SDGs), synergies are needed in addressing neurological conditions in order to understand their common denominators (risk and protective factors), burden and shared challenges. Taking an integrated approach of this type is also in line with the Declaration of Astana (2018) on strengthening primary health care”.

The document points out to a critical role of an integrated public health response to epilepsy and other neurological disorders with an emphasis on primary health care, in order to achieve Universal Health Coverage and meet the Sustainable Development Goals in health. This can be done through innovative strategies that shall focus on a number of areas, which they set out as:

The full text of the report can be accessed here.

The WHA decided to reconvene later in the year in order to proceed with the originally planned agenda, including the report on epilepsy and neurology. It will now be crucial to continue pushing WHO and member states to operationalize these ideas. We cannot lose sight of it due to a current pandemic.

HOW DOES THIS IMPACT OUR WORK AT EU LEVEL?

Very importantly, the WHO report will lend itself to our work at the EU level, where an increase of prioritization for neurological health is badly needed and long overdue.

At our February meeting on brain health we heard from the European Commission representative –Director for Public Health at health directorate SANTE, that the Commission has no current, or even future plans, to address neurological health as a distinctive field and as a priority within its NCD policies. This has been confirmed by the Health Commissioner Ms. Kyriakides several weeks ago in an answer to a Parliamentary written question that EFNA submitted with a support from 18 Members of the European Parliament (read more on this here). Therefore, there is still much to be done at the EU level to allot neurology the attention it deserves.

EFNA with its members stand committed to demand this of EU policy makers.

For more information on EFNA’s advocacy efforts, please email: advocacy[at]efna.net
We are eager to partner with like-minded associations to advance efforts in this space and work collaboratively to bring neurology the attention and resources it deserves.