A new chapter opens for EU advocacy in neurology 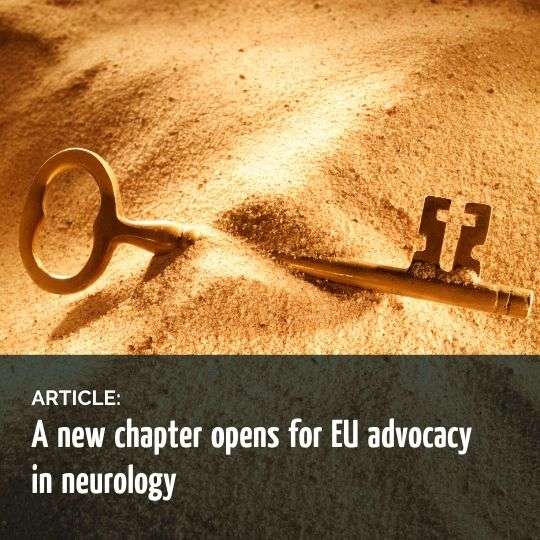 Neurological disorders will be prioritised by the European Commission, with a set of public health actions to be published in December 2023. This work will be part of a ‘Policy Implementation Roadmap’ for non-communicable, or chronic, diseases [NCDs]. It is due to be launched in June 2022, according to a leaked memo obtained by news outlet POLITICO.

POLITICO reports that in December 2022, the Commission plans to publish action proposals for cardiovascular diseases, diabetes, and lifestyle risk factors.

In December 2023, actions on respiratory illnesses and mental and neurological diseases will follow.
“This will be the first time that the Commission addresses the main NCDs areas in a systematic, pragmatic and significant way,” reads the relevant note.

This is a watershed moment for EFNA and its members. For years we have advocated for the inclusion of neurology alongside other major NCDs, based on its burden as the leading cause of disability and second leading cause of deaths globally. EFNA’s efforts culminated in the explicit mention of neurological disorders in the text of the newly launched EU4Health programme.
This work has paved the way for a new phase of advocacy. We can now move to develop concrete solutions that can improve the lives of one-third of EU citizens that will be affected by these disorders.

The upcoming OneNeurology European Summit will be a timely opportunity to start these discussions, and to consider how the WHO’s global action plan on neurological disorders – due May 2022 – can also be leveraged to support this work.

From January, EU member countries — through the Steering Group on Health Promotion, Disease Prevention and Management of NCDs (SGGP) — as well as other Commission directorates, will be able to offer input to the draft roadmap. Stakeholders like EFNA will be also asked for input.
The Policy Implementation Roadmap will aim to achieve a number of goals. These include:

This ambitious new work programme is proof that public health, and DG SANTE, have taken a central role in EU activities since the beginning of the Covid-19 pandemic. Its flagship EU4Health Programme has received more than a 10-fold budget increase, compared to the previous one. A new concept of the European Health Union is also taking shape.

In parallel, COVID put in the spotlight NCDs or chronic diseases. Not only are NCDs responsible for about 90% of premature deaths in the EU, but they are also the main risk factor for becoming severely ill or dying from the virus.

For many years neurology was not resourced and prioritise according to its share of burden. This was due to a reluctance at EU-level to engage in disease specific efforts, coupled with health being seen as a national competence. However, we are now seeing the silver lining of the pandemic for our field.

We need to grasp this opportunity to – at last – make neurology a global public health priority,  and ensure that these draft plans become a reality.