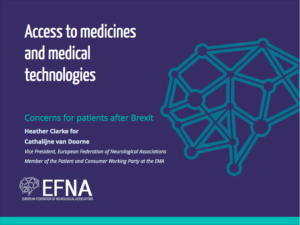 On Wednesday, February 21st 2018, a group of European health organisations came together to discuss ‘Brexit: prioritising patient safety and public health across Europe’. This event focused on what needs to urgently be prioritised in the negotiations in order to preserve patient safety and public health at a critical time when both the UK Government and the EU are preparing for phase II of the Article 50 negotiations.

‘The UK’s withdrawal from the EU will impact patients across Europe and is not an issue for the UK alone’ said Heather Clarke,  EU Policy Officer at the European Federation of Neurological Associations (EFNA).

As a result of the relocation of the European Medicines Agency (EMA) to Amsterdam, the EMA has de-prioritised certain activities such as its work on paediatric medicines and public health issues.

‘In order to free up staff to prepare for Brexit, a number of EMA activities have been temporarily suspended, for example, the development of a new EMA web portal providing information on medicines.

Relocation of the EMA comes a time when more new medicines than ever coming to market. The worry is this means issues in accessing these new medicines due to delays in the approval pipeline’.

A ‘hard Brexit’ would pose the greatest disruption for the European healthcare sector and patients, particularly if there is no mutual recognition agreement on clinical trials, batch testing and diagnostics.

According to a report published on 29 January by the Brexit Health Alliance, patients could face significant delays for new drugs even if the UK agrees quickly on a free trade deal with the EU.

Switzerland starts receiving new drugs an estimated 157 days after the EU, despite having a series of bilateral trade agreements with the EU. That is because drug companies tend to target their new products at the largest markets. The UK accounts for around 3% of global drug sales compared to the EU’s 25%. UK ministers have been urged to be ready to prepare emergency laws to protect against disruption to the supply of medicines.