Negotiations on the EU4Health Programme, which we wrote about during summer, are entering a crucial stage of, what is called in Brussels jargon, a trialog. The three main EU institutions – the European Commission (EC), the European Parliament (EP) and the Council of the EU will be “triangulating” their positions in order to come up, by the end of 2020 (or so we hope), with a mutual agreement on budget and priorities of the EU action in health in 2021 – 2027.

The initial legislative text released before summer by the EC did not mention neurology once in the whole proposal. This has motivated EFNA to endeavour to influence the position of the two remaining dancing partners – EP and Council. After voicing our concerns in an open letter to the EU leaders and member states, we engaged in a constructive dialog with the Members of the EP sitting in the health committee (ENVI) responsible for preparing Parliamentary response (amendments) to the Commission’s proposal. We drafted a number of amendments proposals, reinforcing the importance of including neurology as one of the key priority areas, as well as safeguarding the meaningful involvement of patients in the programme. All EFNA’s suggestions were included among roughly 1000 amendments that were released by ENVI in July. Neurology was mentioned in about 30 amendments suggested by a similar number of MEPs from the 5 main political groups, sending a clear sign that MEPs strategically supported making neurology one of the programme’s priorities. This has now been confirmed in a significantly reduced number of compromise amendments released by ENVI in October and voted upon on 13 October. The EP text lists neurology multiple times along with other main NCDs.

The third co-legislator is the EU Council, representing the EU member states under the leadership of Germany, who currently hold the rotating EU Presidency. In recent months, we have approached all health ministers and Brussels-based health attachés several times, calling for a recognition of neurology. We were exhilarated to learn that the German Presidency compromise document, while removing a significant number of priority areas due to budget cuts, added neurology to a list of main NCDs in its compromise text sent to the EU capitals this October.

In summary, both the Council and the Parliament added neurology to the list of EU NCD priority areas, which until now were encompassing cancer, cardiovascular diseases, respiratory diseases, and diabetes. This recognition is what EFNA has long been campaigning for, but until now our voice was falling on deaf ears in the Commission. The loud and clear support from the capitals and Parliament will undoubtedly pave the way for neurological diseases to be recognized as one of the most important NCDs in Europe and, as such, will allow neurology to be gradually woven into various health initiatives and targets at the EU level.

Following the encouragement from the EC President during her latest State of the EU speech, the EP sided with the EC and asked to restore the budget to €9.4 billion. Here is a quick reminder of where we stand right now: 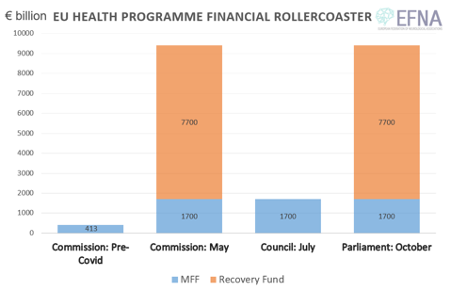 While reversing the Council’s cuts entirely seems unrealistic, the EP and the Council could agree to find some additional money for EU4Health by negotiating an increase of ceilings within annual budgets, as well as by generating ‘new own resources’, i.e. looking for additional income through new EU taxes, such as taxes on plastics and financial transactions. We very much hope that the Parliament will manage to counter the Council cuts to some extent, and we will report back with an update to the graph above once the final data is available.