This is why neurological disorders were included as one of the priority strands in the EU NCD Initiative.

In parallel, in May 2022 the World Health Assembly (WHA) is expected to adopt the Intersectoral global action plan on epilepsy and other neurological disorders (GAP) which was called for in a 2020 WHA resolution co-sponsored by all the EU countries.

A conjunction of the NCD Initiative and the GAP couldn’t be timelier. The European community is now presented with a unique window of opportunity to provide an integrated and cross-sectorial response to neurological health. Investing in this holistic model can bring measurable health and economic gains to European countries. This includes decreasing the incidence of neurological disorders, improving survival rates, reducing complications and disability, lowering treatment costs and – ultimately – ensuring a better quality of life for all those affected.

In view of the above, we strongly believe that the NCD Initiative activities addressing neurological disorders should fully align with the targets of the GAP which provides a comprehensive framework for national action. This synergistic approach will be the most efficient use of resources that are limited and need to be spent wisely.

Based on this, EFNA and its members make the following recommendations:

While actions on the ground will inevitably address concrete neurological diseases, at the strategic level neurological disorders should be addressed in a bundled fashion. This is because they are all related to one discipline – neurology and share a lot of common denominators, challenges, risk and protective factors. For example, there are common symptoms and complications for many neurological disorders – such as pain, fatigue, cognitive challenges, dizziness, seizures and sleep disorders. Successful examples of such bundled approach exist in other areas such as cancer (there are more than a hundred distinct types of cancer, which can vary substantially in their behaviour and response to treatment). This can be best achieved when individual countries develop dedicated neurological/brain health national plans, encompassing all major neurological disorders (or both neurological and mental health conditions), with a dedicated budget line. Such a bundled approach is the most effective way of addressing a disease area (e.g. cancer plans). This is particularly true in neurology: there are more than 400 neurological disorders and, given their huge collective burden, we need a strategy addressing common challenges and solutions. This is why the creation of national plans is the first target of the GAP, with a goal of 75% of countries worldwide developing those in the next ten years.

RECOMMENDATION 2: European platform facilitating the implementation of the GAP nationally and creation of a European guide for quality national neurological/brain health plans

The GAP will be implemented at the national level where member states will work toward meeting the Plan’s targets. To achieve the best results in individual member states, between the global and national dimensions there needs to be regional coordination. The European Commission is well placed to provide a platform that can facilitate the development and implementation of national plans synergistically. Successful examples exist in other disease areas such as cancer and diabetes, e.g. CanCol JA, European Guide for Quality National Cancer Control Programmes or Guide for National Diabetes Plans in CHRODIS +.

The UHC priority benefits package is a set of evidence-informed, prioritized healthcare policies and interventions that respond to the most important needs of the population of a given country. They should be provided through appropriate service delivery and financing arrangements. The GAP includes a target on existence of a set of evidence-informed, prioritized, essential, quality health services and supports for neurological disorders within the UHC PBP package. Services and supports for neurological disorders include financial risk protection and promotive, preventive, treatment, rehabilitative, and palliative care across the life course. Implementing the UHC PBG have the following benefits: equity and access; financial protection; promoting quality; allocative efficiency; accountability; empowering the community.

RECOMMENDATION 5: Routine collection and reporting on a core set of indicators for neurological disorders

Reliable morbidity and mortality data on neurological disorders and their risk factors are the backbone of evidence-based healthcare planning, priority setting and resource allocation. However, these epidemiological studies are scarce for most neurological disorders, which limits the ability to compare and replicate findings. More high-quality studies of the burden of various neurological disorders are needed. For this to happen, capacity in information systems must be built up so that the health outcomes of implemented interventions can be adequately measured. This is why it is important that countries have functioning health data and information systems to routinely collect and report on a core set of indicators for neurological disorders, which is another target of the GAP. This can occur by means of a patient registry, aggregate data or medical records from various sources measured at a system level (national, subnational or local level).

Underlying those recommendations, patient involvement in the implementation of the GAP and the NCD Initiative will be critical. It can be best achieved when involving national neurological coalitions that bring together many different neurological disorders. However, in many countries such alliances don’t exist yet; rather, there is a patchwork of national organizations dedicated to individual neurological disorders. Building up an organizational capacity of neurology patient groups at a national level should be supported by the NCD Initiative. Those groups can become focal points and critical enablers, greatly contributing to the implementation of the GAP targets and NCD Initiative projects. EFNA can assist in the creation or strengthening of those national groups by leveraging its extensive membership covering all major disease areas in all the EU member states and other European countries.

You can download these recommendations in PDF form here. 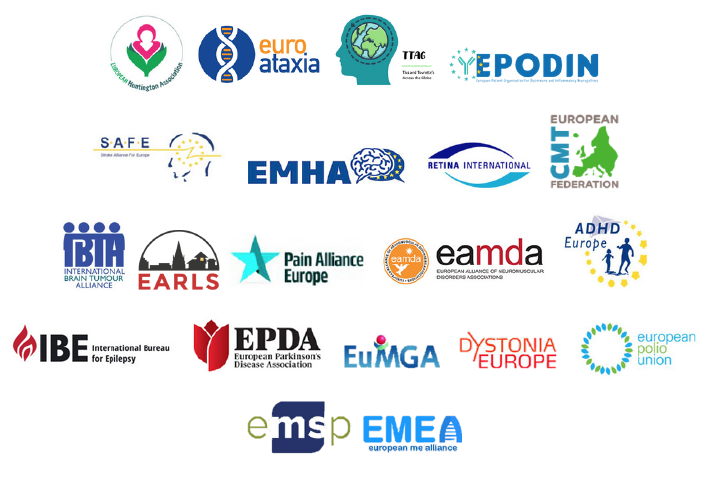