Together Under the Umbrella for Invisible Disabilities Awareness Week 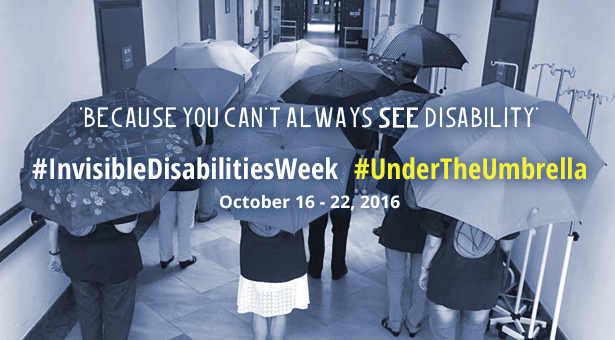 Invisible disability is a term that captures a whole spectrum of hidden symptoms or challenges that are primarily neurological in nature.

Many brain and brain-related disorders cause symptoms that are not obvious to an onlooker. These symptoms can include pain, fatigue, sleeping problems, dizziness, cognitive dysfunction, brain injuries, learning difficulties and mental health disorders, as well as hearing and vision impairments.

While these symptoms may not be visible, they can limit the person’s ability to perform daily activities and severely impact quality of life. Even in brain disorders that have immediately apparent symptoms, the secondary invisible symptoms can be just as, or even more, disabling – and worsened by the stigma that such unseen disabilities can create.

We would like to encourage our membership, followers and supporters to share special #UnderTheUmbrella pictures during Invisible Disabilities Week – this time hiding their faces with their umbrella and sharing a message that mentions a brain disorder and an associated invisible symptom. For example:

If possible, encourage your staff, national counterparts, members and supporters to join in too! Together we can ensure increased understanding of the impact and burden of the often unseen symptoms of brain and brain-related disorders.