“We very much hope that the Parliament will manage to counter the Council cuts to some extent, and we will report back with an update to the graph above once the final data is available.”

This was the last sentence from our October update on the EU4Health Programme. It is with delight that we share the news that, after intense negotiations in Brussels between the Parliament and Council, an announcement came last week that an extra €3.4 billion will be added to the EU’s 2021-2027 health programme. As a reminder, the 2014 – 2020 health budget is €449.4 million.

Many sceptical voices were to be heard in recent weeks discussing slender chances of getting any increase to the budgetary ceilings agreed during tough negotiations between Member States back in July. Adding to that, the capitals have been rather cautious of showing any signs of relaxing their stance on giving Brussels more health powers.

In light of this, the increase is an outstanding achievement of the Commission, Parliament, and civil society alike. Let’s not forget that the initial, pre-pandemic budget suggestion was €413 million. At July negotiations the Council agreed to its four-fold increase of €1.7 billion and has now tripled this further to €5.1 billion. Altogether, this is more than a tenfold increase from the current programme.

One more piece of good news is emerging from this new constellation: back in July, concerns were raised over a legal obligation to front-load the expenditure of the recovery fund money that constituted the vast majority of the EU4Health budget (€7.7 billion out of €9.4), to narrowly address the coronavirus crisis’ effects from 2021-24. This now seems to be off the table, given that the relocated funds will be coming from other financial pots.

It should be added here that these days, the whole EU budget for 2021 – 2027 has been taken hostage buy a couple of countries that do not agree to the new Rule of Law mechanisms. However, it is hard to imagine that, in the longer run, this momentary paralysis will do anything to agreed numbers, including the EU4Health budget.

We are now publishing what seems to be the final iteration of the graph we have been updating through the course of various negotiation phases: 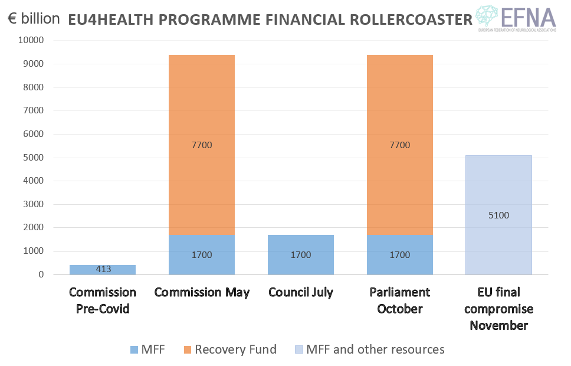