The #BrainLifeGoals campaign is an initiative of EFNA that aims to raise awareness of the impact of neurological disorders.

In 2019, in support of this campaign, EFNA awarded grants of €2,500 each, to projects that aimed to raise awareness and improve understanding of neurological disorder. 28 applications were received from 13 different countries and a wide range of disease areas. The original intention was to award grants to five projects, but due to the high-level of interest and quality of applications, eight projects were selected!

As Brain Awareness Week 2020 draws to a close, we catch up with the winning organisations below and find out how their projects are going.

On August 28th 2019, young RLS patient Lucy Hoekstra started a 573 km-walk from Hurdegaryp, The Netherlands, to Krusbjerg, a small village in Denmark and Lucy’s sister’s hometown.

The goal of this walk was to raise awareness for RLS (Restless Legs Syndrome or Willis Ekbom disease).  Lucy completed the walk in 23 days of walking an average of 25 kilometers per day. On the last part of the walk Lucy was accompanied by a member of the German RLS group – on bicycle.

With help of the #BrainLifeGoals Grant, EARLS were able to print materials and book small hotels for Lucy. A publicity campaign was set up by the Dutch and German RLS patient organisations, and coordinated by EARLS.

During her walk through The Netherlands, Germany and Denmark, Lucy met with many people to speak about RLS, many of whom walked a stretch of the walk with her and she was received in villages by several mayors. The campaign led to publicity in many newspapers, TV stations, Radio stations etc. It was also picked up by the US RLS patient organisation.

Lucy’s walk has resulted in an unprecedented attention for RLS among the general public.
Read a full report on the project here. 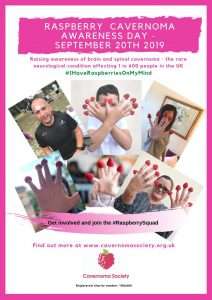 The Cavernoma Society proposed to hold an annual Raspberry Day to raise awareness of cavernoma, which is a lesion in the brain or spine which is made up of abnormal blood vessels and can look like a raspberry. 1 in 600 people have a cavernoma without knowing. Roughly 1 in 400,000 are diagnosed in the UK alone each year, after suffering a stroke or other cognitive deficits following a brain haemorrhage.

The first Raspberry Cavernoma Awareness Day was held on Friday September 20th, 2019 and will now be held every third Friday in September going forward. The day is designed to be a fun, healthy and educational way of building awareness.

To mark the day, members handed out over 2000 flyers and raspberry protein balls with Cavernoma Society stickers on at rush hour in Chichester, West Sussex, Ealing, London and London Waterloo Station. The group secured free Digital Advertising Boards from JC Decoux at London Waterloo, Waterloo East, Chichester, Richmond, Twickenham, St Paul’s, and London Bridge. This was a massive achievement as the Boards ran for the whole week of 16th – 21st September. As a result, traffic to the Cavernoma Society website increased by 200 per cent.
A Raspberry Day Facebook Frame was created and used by hundreds of members all around the world.
Read a full report on the project here.

‘Empowering People with Neurological Conditions to Realise their #BrainLifeGoals’

A series of videos is being developed to raise awareness of the needs of those living with neurological disorders in Ireland.
The two videos released to date are of very high quality and feature:

NAI’s patient consultation in developing this project highlighted the strong view from the patients consulted that there should be an advocacy focus and message to the videos, highlighting that people with neurological conditions need the right services at the right time and in the right place in order to realise their goals and live well with their condition.

Initial videos (below) have been released during Brain Awareness Week. The final video will be filmed and released in late March 2020.

‘Stand Up Chemistry for children with learning difficulties’ 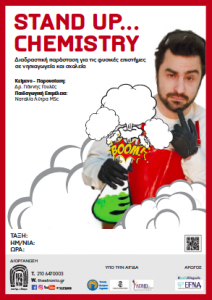 Stand Up Chemistry is an original interactive educational/scientific theatre performance by Theatronio (an NGO that educates neurodiverse learners) geared towards students of all ages with learning difficulties (LD, ADHD, Asperger), their parents and educators. This innovative performance raises awareness of different brains and different learning styles, and in effect models an approach that acknowledges and accepts differences. The project includes a psycho educational part at the end of the show for parents and educators to understand the neurological underpinnings of LD and ADHD brains and to model some of the concepts indirectly taught in the performance.

Eight Stand Up Chemistry performances ran in Athens from October 2019 – January 2020, reaching a total of 300+ children with their parents and educators. The inspiratory and CEO of Theatronio (the NGO that educates neurodiverse learners) is himself an adult with ADHD, an actor and a PhD chemist.

The performances, supported by the #BrainLifeGoals Project Grant, ran under the auspices of the Association of Greek Chemists , the Union of Greek Physicists and with scientific collaboration of ADHD Hellas. Read a full report on these activities here. 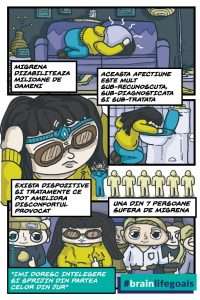 APAN’s innovative way of raising awareness of brain diseases has been to create a comic (printed, as well as digital). The material focuses on five diseases, each of them being presented in a chapter by a different character!

On the right you can see a page from the comic featuring someone affected by migraine.

The comic is currently available in Romanian, with an English version on the way.
We look forward to sharing that with you soon!

‘Step Up for Parkinson’s Performance’

Step Up for Parkinson’s, Malta 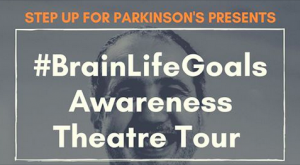 Step Up for Parkinson’s is a Voluntary Organisation that offers free specialised movement classes to people with Parkinson’s Disease and their caregivers in Malta. The organisation has grown rapidly to offer classes to 170 participants, through 6 classes per week, with a team of 11 trained teachers. The great benefit that performing has on the participants is evident. There is a greater sense of confidence and agency, and the shame and isolation associated with the disease are mitigated. Classes are proven to improve the quality of life of the participants physically, socially and psychologically.

Through the #BrainLifeGoals Project Grant Step Up for Parkinson’s has organised a performance – a full theatre production with their participants. The performance will be a fundraising event aimed at sustaining the ongoing free services of the organisation.
The performance will also give further motivation to participants to attend the classes, and feel better about themselves and their position within society. The community will be brought together through performance, and improving the quality of life for the participants and raising awareness of Parkinson’s Disease.

Sadly, this event has been postponed due to the COVID-19 virus but we look forward to sharing pictures and video from the event with you soon.

The Stroke Association Serbia has been raising awareness of stroke and of stroke survivors’ needs by sharing stories of young stroke survivors and their brain life goals. Read English translations of these stories on the EFNA website here: https://www.efna.net/category/brainlifegoals/

Activities have been supported by a social media campaign as well as publications in the traditional Serbian media. Stroke Association Serbia is part of Stroke Alliance for Europe (SAFE) which also allowed for the dissemination of information about the project trough SAFE’s network of 30 European countries.

“This patient-centered project should motivate people to better appreciate brain health, because there is no health without brain health!”
Nenad Nikolić, Stroke Association Serbia

This project will involve the creation of a targeted video marketing campaign to raise awareness of the need for research into Myalgic Encephalomyelitis (ME).

ME patients are often said to have a list of things they would do if they became healthy again – often very simple things which have been taken away from them by the disease and which others might deem to be trivial. These ‘trivial’ things may be just walking for 100 metres, being able to sit in the sun or read a book – things most people take for granted but things that have been taken away due to the consequences of this disease.

Due to unforeseen difficulties the EMEA project has faced delays and will now be completed in early summer 2020.